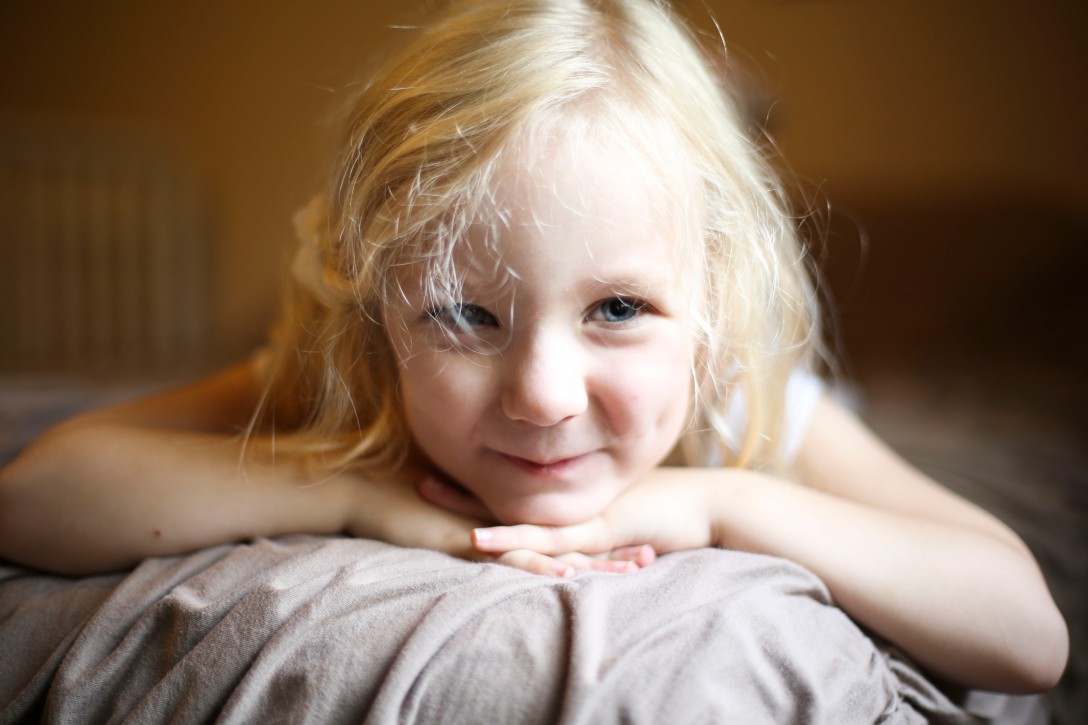 how is it possible that you are four years old, cuteface? you are officially my Big Kid.  you are all gangly arms and legs and growing so fast. i love your white-blonde wavy hair and sparkling cool blue eyes. i love how much you are not like me–my extrovert (“mom, i need to have people around me all the time. all the time!”), and little mama (“mom, june is stuck. i told her not to do it”), and goofball all the way. you love to read (possibly as much as i do) and i love to read to you–going through our chapter books this summer has been such a pleasure, and i love watching you discover wonderful books for the first time. you are an awesome big sister–way better than i ever was–and you never get tired of laying next to wendy to “talk” to her and play with her (and hardly ever fall on her, ha). i really don’t know how i’d do it without you actually. you always have something surprising and interesting to say–playtime with horses and princesses is some of my favorite time of the day (though can i please not have to be a car or a marker all the time? it is really hard to make a marker emote.) sometimes i worry that i’m not giving you enough–you’ve got two little sisters who are so little and need so much–and i pray for you all the time, that God will fill in all those places that i’m lacking. i pray that God will capture your sweet tender heart very young–i’m a firstborn too and i hope you know that i love you no matter how smart or successful or obedient you are. i can’t wait to watch you grow another year.

For about a month, zu had a problem that we could not for the life of us figure out. I won’t go into detail, to save her from future embarrassment, lets just say she was potty trained and Regressed.

We tried taking her to the pediatrician (tummy problems?), tried ignoring it (a cry for attention?), considered punishing it (especially after the wiping-it-on-the-floor incident…), and the potty-charts upon-potty-charts, but nothing seemed to work.

Then my friend jenn mentioned that maybe this is a Control issue, not a rebellion or necessarily emotional issue like we’d thought. We’re planning a move and I’m pregnant, so there’s a lot going on in z’s little 3year old world. A lot that she has no control over.

so I stopped doing what they typically advise you to do with 3 year olds—give them a couple options of what to wear in the morning, to limit choices—and instead let her have full reign of her closet.

the problem stopped! She loves picking out her own clothes—she lays out her outfits the night before and sometimes also before nap, for those afternoon wardrobe changes. And sometimes also her sister’s outfits, though junie owns a disappointing amount of “casual dresses”.

If we had only known it was as easy as letting her mix leopard print, stripes and tutu-skirts, we would have had a lot easier time this winter. Fingers crossed that the success continues….

Goldilocks, ladybug girl, my three year old, you are easy-going, a sweet quiet-spirit, a peace-maker and nurturer. You bring so much joy and laughter to our home! The day we brought you home from the hospital, to the falling-down rental farmhouse, lonely in the pastures, I sat on the bed, laid you down, looked at your smallness. your daddy fell asleep on the couch in the living room, and you started crying, and I was terrified. Before you, I’d only held a baby once or twice, a minute or two. Before you, I’d never changed a diaper, made a bottle, bathed a baby. Then I became your mommy and changed forever. How have I possibly been entrusted with such sweetness? I can’t help but feel like Moses at the burning bush, telling God I can’t do this and him telling me that I don’t have to, that He will. I pray always that God will make me able to shepherd you, to love you like He loves you, to teach you of his love for you. I’m thankful that I’ve been given the gift of raising you, and I’m happy to celebrate you, funny little blondie—with your story-telling and ballet dancing, dimples and delicate hands. Let’s eat cake!