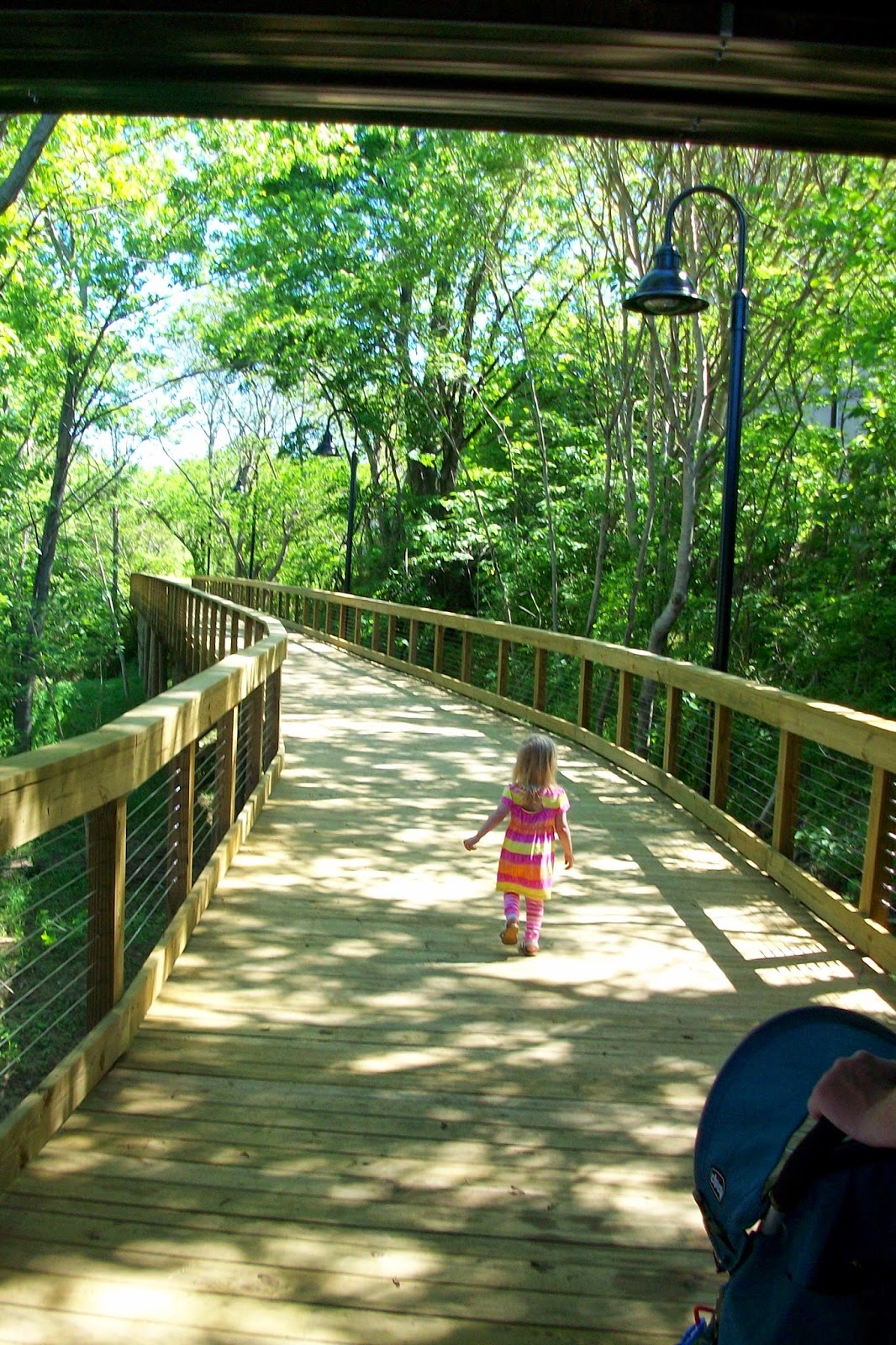 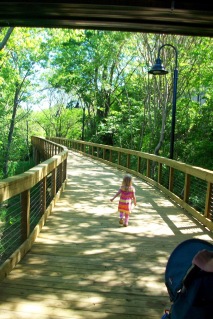 green tea with wildflower honey and milk, chubby dimpled legs, a morning spent outdoors, a good talk with a couple we’d never met, dancing-spinning toddler-wild, hazelnut peanut butter on oatmeal bread, gap-tooth baby smile, clean cool water, honey-apple baby lotion, the interlibrary loan system, the spent-feeling of a long workout, conversations with my husband of our hopes and our dreams, coordinated nap and bedtimes, a shower at the end of a long day, gray foxes eating the catfood at the garage door, painting her tiny fingernails and letting her paint mine, finding just-the-book at the local library, hand me down tutus, my husband home before midnight in his summer workschedule, neat-stacked piles of fresh laundry, the everyday of it and the every single day of it. 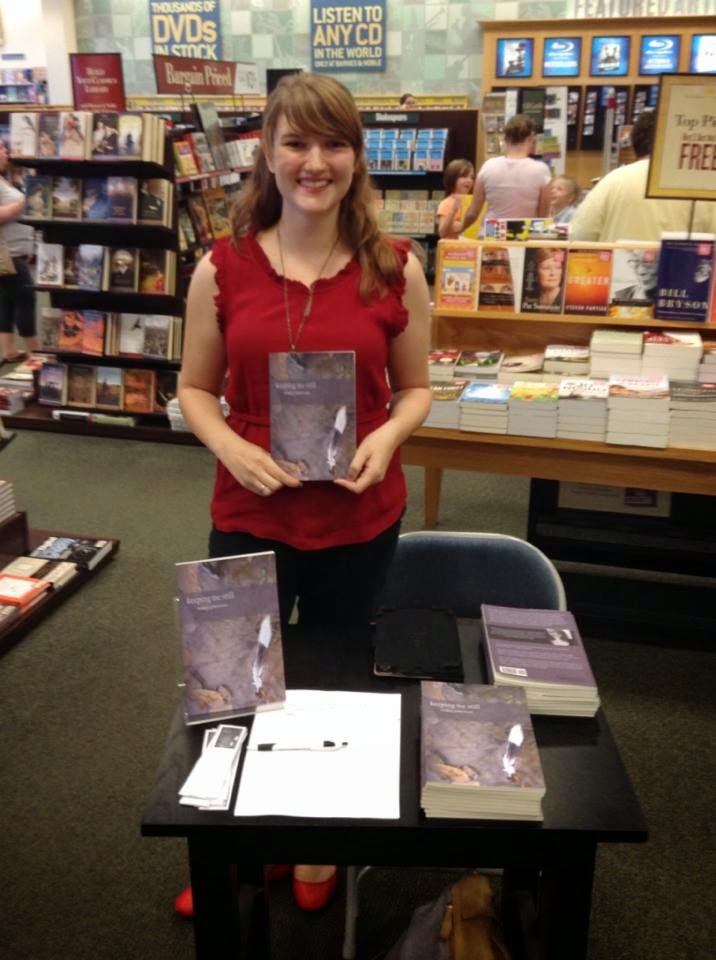 last Saturday i participated in a local author event at the local barnes and noble. a dozen of us, each with our little black wooden tables, plastic book props, and stacks of books were scattered around the store. i was the only poet. i didn’t sell a single book.

possibly this was because I was in the back of the store not the front or by the coffee shop, but what is more likely is that my book is a poetry book and most people give poetry a wide berth.

before publishing my book, my goal was publishing the book—sort of like the giddy bride planning all the flowers and dresses and colors upon colors—but then once the book was out, That was when real life kicked in, the Marriage.

And since entering into life-with-my-book, i’ve seen more and more that no matter how good your book is, poetry has a small, particular audience, so you have to sift, and search, and find them.

it’s a little more work to convince someone to pick up a book of poems, strange things they don’t think they’ll understand or relate to, rather than to convince them to pick up a novel or memoir, a straightforward story like they are used to.

it can be discouraging—some days I think why did I write this thing that no one wants to read—but that is when I remind myself of the value of a small life, the value of offering creative work to the world, even if the readers are few.

and i know, too, that my editor and press and other “winter geese” completely support and believe in me–i’m grateful to be part of that little literary community and to know that my work was plucked out of the stacks and stacks of submissions, and my editor thought, yes, this book is worth the time. even when not a single book sells at a certain signing.

i’d be lying if i didn’t say i was a little bit bummed about not selling any books; though i’d not expected to sell more than one or two, i had very much hoped to sell at least one. and the pitying eyes of other authors and the event coordinator, oh my.

but i would (and will) go again. it was nice to chat with other authors, particularly others who have published with small presses and know the same benefits and hurdles of doing so. i feel better connected to our small literary community and like i “raised awareness” of my book.

big book stores are perhaps not where the poets ARE–and when scheduling future events, i’d likely do well to focus on indie stores, universities, coffee shops, you get the idea–but how can i complain about a couple of hours spent sipping free coffee in a bookstore, talking to writers about writing? that is a couple hours well spent.

the holidays and our travels are over, visits with family and dear friends as short as they always must be. I’ve packed away the ornaments, pulled down the strands of white twinkling lights from our windows. the spring semester has started, a new year begun.
Over the past couple months, I’ve had so much that I’ve wanted to write about, but I’ve been unsure of myself.  I met the new year with both dread and irrepressible hope.
Bryan works nights, the night librarian, a beautifully romantic title for a not so romantic job. At first, the hours worked wonderfully—we’ve been able to keep our kids home and for me to work full-time.  We always knew, though, there’d come a tipping point, and we’ve reached it.
Last fall was very difficult for me and for us as a family.  Those months that we anticipated being a time for us to gel as a family of four, to bond, to weather the inevitable sleeplessness and constant care of a newborn, became months where bryan and I rarely saw each other. His job changed so that instead of going in after the girls bedtime a few nights a week, he went in earlier and earlier, and eventually it whittled down the time we had alone together, with no kids to care for, to two nights a week, one taken up by the church small group we lead at our house.
I’ve never liked bryan working nights, but I could bear it when we could make time in other parts of the day; with two kids and my full-time job, we can’t. I miss him terribly.
In the midst of our missing each other and the difficulty of taking care of colicky june (who was and is and will always be june, not zuzu the second) and a two year old, God was working on us in some areas we didn’t want him to mess with, old mire deep in the soul.
What does it all add up to? We don’t know yet. I started asking that question though. In the past, before a big change, we had these same things happen—the situation changing so that we couldn’t stay put, God working in our hearts to prepare us for something new.
I don’t think God has forgotten us. I think he has a plan for us, something prepared already.  He has never led us to an insurmountable obstacle without providing a way out—sometimes a surprising way out. I would’ve never suspected, when bryan and I first got married, that we’d live in Boston or that Bryan would go to seminary or our nearest neighbors would be cows. i don’t know if this time change means moving again or new jobs or a new ability to keep up with what we’re given.
So part of me is despairing. I cried and cried this week, returning to school ,returning to a work schedule that keeps bryan and me apart and wears us down. That same part of me does not see a way out. Has no confidence that there will be anything but this.
another part of me hopes. That God will provide. That God cares about our little cares. That if I pray for something, he will answer.  And if he says no, then maybe I was praying for the second-best thing for us, which I’ve done before; he always gives us the first-best, even if it doesn’t seem first-best at the time.
Because we are his children, and he loves us.
Loading Comments...